Johnson, Schaeffer cast ‘no’ votes on creation of new water board 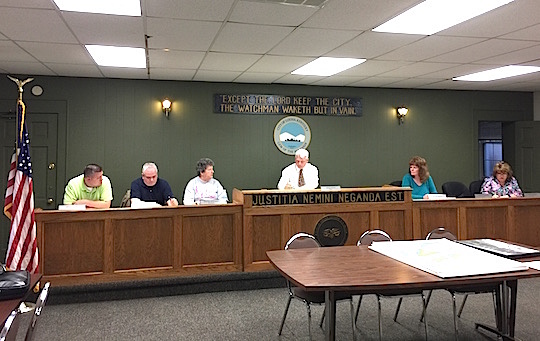 It was a brief agenda at the April meeting of the Louisa City Council, where the main order of business was the second reading of the ordinance to establish the Louisa Utility Board.

With 5 of the 6 council members in attendance, (Tom Parsons could not attend) council had some discussion on the details contained in the ordinance, specifically, requirements for who could be appointed as a member. 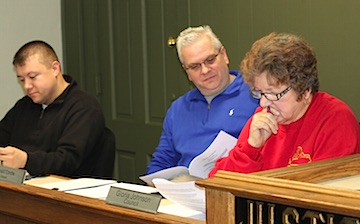 After some debate, it was determined that the ordinance would require Utility board members to be a registered voter and be serviced by either the Louisa water or sewer system. It was not clear if the members have to be city residents.

Members were not appointed to the board during the meeting,

Mayor Slone said there have been approximately 22 applicants who have expressed interest in serving on the board, which will pay each member $50 per month. He also noted  that he had interviewed and narrowed the number down to the 4 members he will appoint. The mayor (non voting)  and one city council member will also serve on the board but not be paid.

“I was prepared to appoint them tonight, however, the City Attorney has advised that we should wait until the May meeting, since some minor changes were made to the ordinance,” Slone said.

Council passed the ordinance, with the approved changes, on a 3-2 vote, with Gloria Johnson and Lisa Schaeffer voting ‘no’. Both were members of council when the old water Board was dissolved last year.

They both said at the time that there is no reason to have such a board because the city council has to make the decisions in the end, anyway. “It’s a waste of taxpayers’ money and it causes all kinds of confusion,”  Mrs. Johnson said and Schaeffer has said essentially the same thing.

Slone said Council must approve the nominations once he has appointed them. Ms. McGuire may not be allowed to vote on the members because her husband, David, is the Water and Sewer Dept. Supt. Some Louisa citizens have said in letters to The Lazer that she should not be able to vote on anything that involves the water department including the vote to create the new board.

But appointed City Attorney Eldred ‘Bud’ Adams said she can. “I see no problem with Mrs. McGuire approving the Board because it does not directly effect her husband; it is simply an ordinance of general application,” Adams said in a message this afternoon. It is not clear if he meant the vote on creating the board or voting on the actual members.

Other items approved by council was the approval to advertise for bids for and Energy Service Performance Contract.

Council had voted in a previous meeting to allow a study to be conducted, at no charge, to determine what energy savings improvements the city could make to save money on power bills.

The study was conducted earlier this year, with the next step being advertising for bids for the improvements to be made.

“Part of the requirements for bidding is that the cost to implement the energy and cost saving improvements, cannot cost more than the amount saved,” Slone said. “In other words, if one of the projects costs $10,000 to do and we don’t save $10,000 in energy reduction savings, then the contractor has to pay us the difference”

Council approved the measure in an all yes vote.

Any potential contractors wishing to place a bid must attend a meeting on April 27th and agree to the requirements of the contract that will be in place once the bid is awarded.