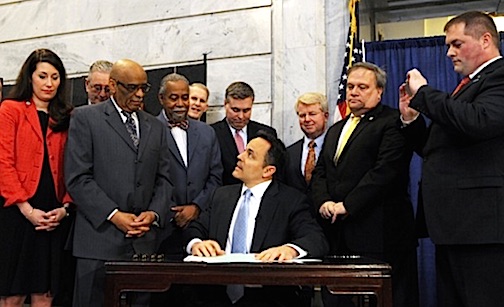 But after West Powell testified of how he stole a car stereo when he was 18 and was charged with a , Sen. Whitney Westerfield (R-Hopkinsville) said something clicked and changed his  on the subject and ultimately also the Senate’s.

“Westerfield… is the man who that I think most critical to this,” Owens said. “Mr. Powell you testified and he had an epiphany. He changed, but your testimony led him to understand the difficulty that people in your situation have. As the chair of the judiciary committee of the Senate, his help and support were critical.”

Westerfield changed the  of low-level Class D felonies to 61 offenses, capturing about 70 percent of the Class-D felon population.

The bill’s language, written by Senate President Robert Stivers (R-Manchester) allows felons not to expunge their , but erase them after meeting certain , such as a five-year waiting period and  all sentence requirements. The bill passed in the Senate 33-5 and later in the House 84-13.

Owens finished his short speech by saying the bill’s passage would be “life-altering piece of legislation,” and the “most consequential” to come out of the 2016 legislative session.

For Westerfield, the bill is about nearly 100,000 Kentuckians who it can give both hope and redemption.

Bevin, who rescinded former Gov. Steve Beshear’s prior expungement order, said the bill was the right thing to do at the right time and it is good for the Commonwealth.

Bevin told The State Journal he hopes to see more civil rights restored in the future.

“I’m in favor of other civil rights being restored,” Bevin said. “I think it’s important that we change the constitution of the Commonwealth of Kentucky. To put this on the ballot, to allow the restoration of voting rights for example. Whether it’s voting rights or the right to bear arms or whatever the case may be, there are certain civil rights that people lose as a part of the judicial process that I would be a proponent of seeing be restored.”