SHELTER PROVIDED FOR CITIZENS BECAUSE OF ODOR 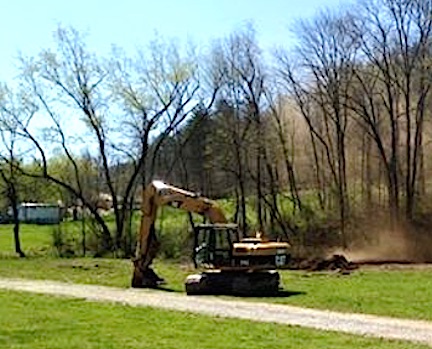 FALLSBURG, Ky. — All is back to normal after an earlier natural gas leak emergency via a snafu during a construction work project caused a major headache for a couple of hours in the Fallsburg area.

KY Route 3 South of Fallsburg was closed just after 2:45 P.M. due to a large gas line break in the area of the Haunted House. The Fallsburg Fire Department and Louisa Fire Department responded to the gas leak scene.

Also anyone who was in an area from 3D Road to Fallsburg store on KY 3 needed to shelter in place due to the intense odor of the massive gas leak.

And to top it all off, parents in the area who had children who are students at Fallsburg Elementary received phone calls from the school telling them that those picking their children up at the school had to seek alternate routes, as well that those traveling by school bus also would redirected to different roadways to get home

According to the Lawrence County emergency officials, it was a six inch gas line running from well sites owned by Alberta Gas Company that was breached and ruptured by a contractor who was working in the area performing some work and did not realize the line was there and accidentally dug into it with an excavator.

Alberta gas company officials arrived on the scene about an hour after the leak began to shut down the broken gas line, and the leak was stopped at around 4:30 P.M. Route 3 was immediately open thereafter and the shelter in place was lifted

(There is no word yet on any legal, civil citation, or even criminal charges the contractor who broke the natural gas line might face, but it is likely one or all those outcomes is a distinct possibility compared to those who have caused similar disruptions with past natural gas leak accidents in the local area.)