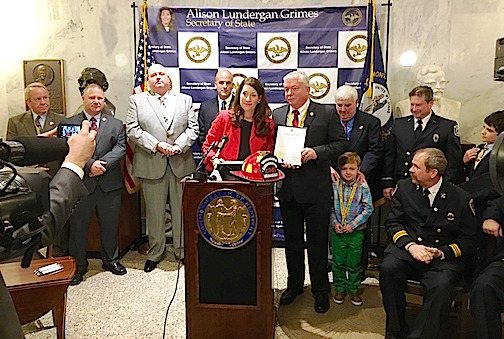 FRANKFORT, Ky. (April 12, 2016) – Secretary of State Alison Lundergan Grimes today filed and recorded legislation that will expand benefits for Kentucky firefighters. Senate Bill 195 allows the families of fallen firefighters who battled cancer to be entitled to a line-of-duty death benefit. The General Assembly unanimously approved the legislation and it became law without the governor’s signature.

“As Secretary of State, I have worked to stand up for those who protect us. Today’s legislation is long overdue,” said Grimes. “It finally lets our heroes know that after they have fallen the Commonwealth will be there for them and their families.”

Senate Bill 195 allows firefighters who die as the result of certain kinds of cancer to be eligible for a lump sum death benefit. The bill covers 12 types of cancer. Criteria for eligibility include having served more than 5 years as a firefighter and having not use tobacco products for more than 10 years prior to diagnosis.

Volunteer and professional firefighters from around Kentucky, many of whom are currently fighting cancer, joined Grimes for the ceremony. Members of leadership of the Kentucky Professional Fire Fighters attended, and they applauded the legislation.

“We’re so happy that Secretary Grimes is bringing attention to this important bill, and we are proud to stand with her today as it becomes law,” said Joe Baer, president of the Kentucky Professional Fire Fighters. “Her support means a lot to our firefighters and their families.”

Monica Rath, a volunteer firefighter with Southgate (Ky.) Volunteer Fire Department, recently passed away after a years-long battle with cancer. Due to the timing of the passage of the legislation, her husband firefighter Lt. Steve Rath and their son will not benefit from the new law, but they were on hand for the ceremony.

“I am very thankful for this new law, and I know Monica is looking down and smiling ear to ear knowing that this will help firefighters and their families from now on,” said Steve Rath, who serves with the Fort Thomas Fire Department.