FRANKFORT – The Kentucky Public Service Commission has opened an investigation of the operations and management of the Martin County Water District. 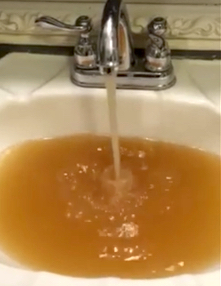 In an order issued Monday, the PSC cited longstanding concerns about the district which have not been addressed or have resurfaced in recent years.

“In numerous inspections and investigations (at Martin County Water District) since the late 1990s, the (PSC) has found lingering problems of significantly high water loss, lack of performance of routine maintenance and testing, and failure to follow acceptable management practices,” the PSC said in a news release.

The order cites a number of problems:

· Martin County Water’s loss rate has been in excess of 60 percent in recent years, which is more than four times what is normally permitted in Kentucky regulations. That means that six out of every 10 gallons the utility produces or purchases are unaccounted for and not reflected in metered usage.

· Martin County Water has not yet implemented a number of remedial actions required following a 2007 independent management and operations audit. Those include developing a comprehensive plan to reduce water loss, implementing a  and improving financial management.

· According to a complaint filed by a customer, Martin County Water has failed to comply with a number of regulations related to service and .

Monday’s action is the third against Martin County Water since 2002. In that year, the PSC investigated the district’s ability to provide adequate and reasonable service. A 2003 settlement listed 43 steps that Martin County Water would take to correct deficiencies in its operations.

In 2006, the PSC opened a second investigation. That proceeding led to the 2007 management and operations audit, which was  in 2008.

A 2014 PSC review found 37 uncompleted corrective measures. Martin County Water was told to address the backlog. A number have since been finished, but significant work remains to be done, the PSC said.

Taken together with the complaint, from district customer Gary Ball, the recurring problems require a proceeding to “investigate the situation fully” and to “deal with both the immediate situation…and the long-term issues concerning the operations” of Martin County Water, the PSC said.

Monday’s order directs Martin County Water to attend a conference with PSC staff in May. It also dismisses Ball’s complaint, because the PSC does not have the authority to redraw water district boundaries, as he had requested. But Ball’s allegations will be considered in the course of the investigation, the PSC said.