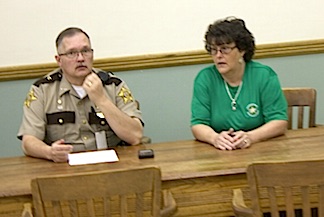 A special meeting was held by the Lawrence County Fiscal Court on Wednesday, April 6, to approve several items.

The first item on the agenda was to approve refund payment to Sheriff Garrett Roberts’ office. A motion to approve was made by Magistrate Morris Howard and seconded by Magistrate John J. Lemaster. Repayment had to be made due to a computer error, where the amount wasn’t carried over from Dec.

The court authorized the Clerk to advertise for bids on Brookside/Summer Lane Bridge repair.

The 2014 Sheriff’s Franchise Settlement was accepted, as was the 2015 Sheriff’s Fee Settlement in the amount of $70,343.17. Approval was granted to seek bids on roller for county garage.

The last item on the agenda was to approve a lease contract between the Lawrence County Fiscal Court and Legend Enterprises for the beach store. Owners of Legend Enterprises made a presentation to the court, showing their plans for the lake area near the marina.