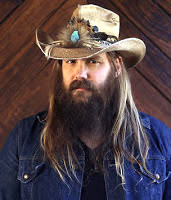 Eastern Kentucky native Chris Stapleton has been cleaning up at awards ceremonies recently. Stapleton, who in February won two Grammy awards, picked up six Academy of Country Music awards Sunday night, including Male Vocalist of the Year, New Male Vocalist, Song of the Year for “Nobody to Blame” and Album of the Year for Traveller.

Last month Stapleton played two free concerts in his hometown of Paintsville, Ky., one for students at his old high school, Johnson Central, reports the Paintsville Herald. He donated $60,000 worth of instruments to the school band, Andrea Saddler reports for the Floyd County Times.

In anticipation of Stapleton having a big night on Sunday, CBS featured a special on him on its program “Sunday Morning.” “Stapleton grew up in Eastern Kentucky, an area that has produced many big names in country music,” Mark Strassmann reports. “Like Loretta Lynn, Stapleton came from a coal-mining family. Both singers attended local high schools. (Chris was a valedictorian at his.) After high school, he met some local songwriters and had a revelation,” telling Strassmann, “I didn’t know they would pay you money to sit in a room and write songs for other people. I always thought that George Strait was singing a song, he made it up, and that was the end of it. But the instant I found that out, that that could be a job, I thought, ‘That’s the job for me. I gotta figure out how to do that.'”

Stapleton relocated to Nashville, Strassman reports. Stapleton told him, “Four days later I had a publishing deal. Which is not—that is not anybody’s story, but that’s mine.” Stapleton, 37, has seen his first album go platinum for topping 1 million sales. Stapleton told Strassmann, “I’m new to a lot of people, and that’s true. I’m not new to a lot of people in Nashville. They’re like, ‘Man, I’ve known that guy for years. He’s been buggin’ everybody!”

While Stapleton is now enjoying success for his debut album he has been writing songs for others for many years. He has had six No. 1s on the country charts, with artists such as Tim McGraw (“Whiskey and You”), Sheryl Crow (“Homesick”) and Adele (“If It Hadn’t Been for Love”) recording his music, Strassman reports. “Critics hailed Traveller and it sold respectably.” After Stapleton and Justin Timberlake took to the stage in November at the Country Music Awards—where Stapleton won three awards—to perform “Tennessee Whiskey,” sales soared. The album, which had been released in May 2015, “re-entered the Billboard charts at number one—in all genres.”