…with Certificate of Extraordinary Personal Action 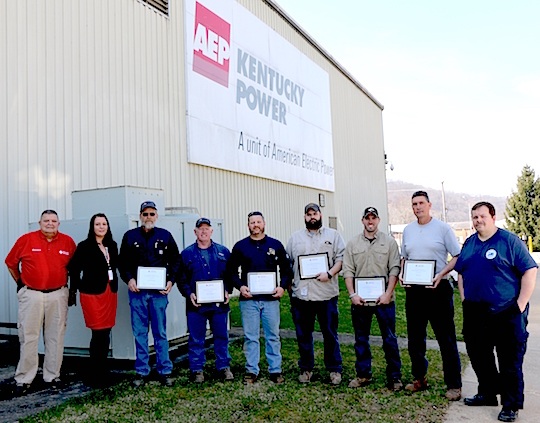 Pikeville-based David Sammons, Myles Robinette, Aaron Sanders, Ryan Thornbury, Paul Layne and Cody McKay received the recognition for their efforts. The six were working to repair downed wire near the home of Doris and Robert Lee in Pond Creek on Feb. 17 when they saw flames coming from the chimney. Their quick actions snuffed out the fire in minutes.

“Every day ordinary people make extraordinary contributions by putting their needs aside to help others in times of crisis,” said Joanna King, executive director of the Eastern Kentucky Chapter of the American Red Cross. “We are proud to present David, Myles, Aaron, Ryan, Paul and Cody with this award. They had the courage take charge and assist in a true emergency.”

Kentucky Power President and COO Greg Pauley said he’s not surprised to hear that employees did not hesitate to help strangers in need.

“Their actions exemplify what we stand for and who we strive to be at Kentucky Power,” Pauley said. “We all are incredibly proud of them for their heroic efforts.”

‘…On that cold February morning, Sanders saw the flames while working in one of the bucket trucks. He yelled down for someone to call 911 as Mrs. Lee came running out of the house screaming for help. Thornbury then grabbed a fire extinguisher and got on the roof to try to put the fire out from above, while others went inside and pulled burning logs from the Buck stove and to help those inside safely escape the smoke-filled house. Their efforts saved the home, said Elkhorn Volunteer Fire Department Chief John Moore.

“It’s an old house, and it could have burned to the ground by the time we got there,” Moore said. “They were about 4 ½ miles out, and old homes go up quick.”

Every year 2,500 people die in home fires. About 84 percent of those fires– some 27,000 — start in chimneys or fireplaces, according to the Chimney Safety Institute of America and the American Red Cross. The Lees use their wood stove to help heat their home all winter long, Mrs. Lee said. A buildup of flammable creosote contributed to the fire, Chief Moore said.