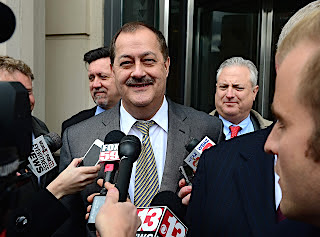 Don Blankenship, who was CEO of now-defunct Massey Energy—operator of the West Virginia coal mine where 29 miners died in an April 2010 explosion—ran the company like a drug lord, federal prosecutors told Anderson Cooper of CBS’s “60 Minutes.” Booth Goodwin, U.S. attorney for West Virginia, who led the prosecution, told Cooper, “The defendant was the kingpin. … Profits over safety. He set the tone. He set the corporate culture.”

Blankenship, who was convicted in December by a federal jury of conspiring to violate mine safety and health standards at Upper Big Branch, was accused by prosecution of “ignoring mine safety laws and fostering a corporate mentality that allowed the disaster to occur,” reports 60 Minutes. Prosecutors say for years Massey condoned and tolerated safety violations for the sake of profit. Assistant U.S. Attorney Steve Ruby, who led the prosecution with Goodwin, told Cooper, “Right up, until the time the Upper Big Branch mine blew up, that was the way the company ran, because everybody understood that was the way Don Blankenship wanted it run.” (Read more)