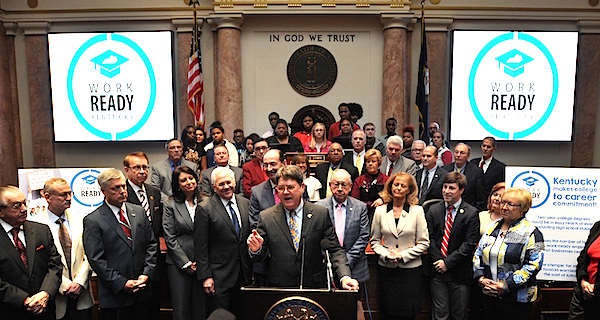 “It has been nearly 20 years since we have seen an idea that could have as big an impact as this one on postsecondary education,” House Speaker Greg Stumbo said. “If enacted, it would put a two-year college degree within easy reach of every graduating high school student. This is a game-changer for families worried about the cost of tuition and for businesses that say that they cannot find enough trained workers. I don’t think we can afford NOT to do this, if we want to build on the many gains we have seen at our colleges and universities.”

“As important as it is to invest in new and improved facilities, it is more important that we invest first in those who will be using them,” Rep. Rand said. “KCTCS has played a critical role in training our current workforce, and this legislation will make it easier for these schools, and those they serve, to do even more.”

“We know there are a number of high school students who still feel like higher education is out of reach,” KCTCS President Jay K. Box said. “This program will help to eliminate the financial barriers and allow them to achieve the Kentucky dream of a getting a higher education that leads to a good job that will improve lives of their families.”

Under House Bill 626, all full-time high school students who graduate from a Kentucky high school – or have their GED before turning 19 – would be potentially eligible for the Work Ready Kentucky Scholarship Program, beginning this fall.

This scholarship would apply only if there is a gap remaining after taking into account all state and federal grants and scholarships like KEES, which students earn in high school with good grades. Student loans or money received through work-study programs would not be factors in determining the scholarship size. In addition, this scholarship could not be used for books or other related college costs, such as travel or housing.

Students would apply during their senior year in high school, and they would have to qualify for in-state tuition. They would also be required to complete the Free Application for Federal Student Aid (FAFSA); take at least 12 college credit hours per semester; maintain at least a 2.0 GPA; and stay enrolled continuously, unless an absence of up to six months is approved under the bill’s guidelines.

Eligibility for the scholarship would end once the student has received money for six semesters; has an associate’s degree; or is four years removed from high school.

The program will be administered through the Kentucky Higher Education Assistance Authority (KHEAA).

· Goal: To provide the skilled workforce our businesses and industry need, while providing a debt-free career or technical education to Kentucky high school graduates.

· It would ensure tuition at a KCTCS school is free for qualified students, after factoring in scholarships and state and federal grants each eligible student receives.

· Student loans and work-study programs do not count against the scholarship.

· The program would begin this fall, meaning this year’s high school seniors would be the first class to qualify. More than 3,220 students are expected to enroll, based on the results seen in Tennessee’s Promise Program.

TO QUALIFY, STUDENTS MUST:

· Be a high school graduate OR receive a GED before turning 19;

· Be eligible for in-state tuition;

· Enroll in a KCTCS school immediately after high school;

· Maintain a 2.0 GPA or better each semester;

· Eligibility for the scholarship would end once the student:

· Has received money for six semesters;

· Has an associate’s degree; or

· There are provisions allowing KCTCS to grant leaves of absence for up to six months.

Q: How will it be funded?

A: Funding will be provided in the budget bill. We do not anticipate using lottery funds.

Q: Will this replace the governor’s workforce initiatives in his budget?

A: Possibly. The governor’s budget failed to provide any details regarding how he would expend large sums of money on workforce development. We would prefer to pass a plan with real objectives that outline the details of the plan, and that will have nearly immediate results.

Q: Will this have an impact on enrollment at the four-year colleges?

A: We believe this initiative targets students who likely would not have had an opportunity to attend college at all. We also believe that it will provide a new pipeline of transfer students who will ultimately go on to complete a four-year degree at one of our state institutions. This is especially exciting as it offers an opportunity for those students to realize that maybe they are, indeed, college ready; they just never had the resources to get them there. This also enhances the possibility that students graduate from college debt-free.

A: Not initially, but we hope the funding will become available to include adult students in the future.

· Earlier this year, the Council on Postsecondary Education reported that Kentucky ranked eighth-best among the states in the percentage increase of college degrees and credentials awarded between 2003 and 2013.

· Kentucky’s largest 10-year growth, at 159 percent, was in undergraduate workforce certificates. The number of certificates grew by more than 12,000 awards.

· There is cause for caution since the pace of growth is slowing.

· In December, the U.S. Dept. of Education reported that our 2013-14 graduation rate of 87.5 percent was ninth-best among the states.

· The Kentucky Dept. of Education said in January that Kentucky graduates a higher percentage of its low-income students, on time, than any state in the nation.


· In late January, the Kentucky Education and Workforce Development Cabinet reported that Kentucky added 40,200 jobs between Dec. 2014 and Dec. 2015, based on a federal survey that excludes agriculture and the self-employed.

· The construction industry added 4,600 jobs during those 12 months, while manufacturers added 7,800 jobs.

· Kentucky’s unemployment rate is 5.3 percent, and was lower than the national average for much of last year.

· In December, Ford announced it plans to hire 2,000 more workers and invest $2.4 billion over the next four years at its two Louisville facilities.

Office of the Kentucky House Speaker