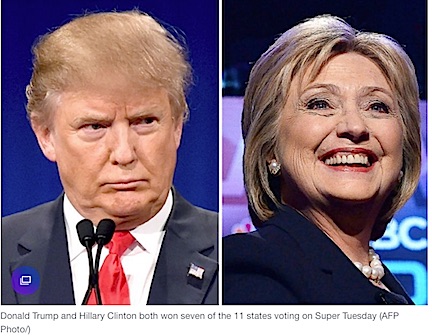 Hillary Clinton and Donald Trump, the two presumptive candidates for president in November, each paid lip service to out-of-work coal miners this week.

He made similar comments during a rally Monday night at Radford College in Virginia.

During Clinton’s victory speech after the “Super Tuesday” Democratic primary races Tuesday night, she said something must be done to help the coal miners who have lost their jobs in central Appalachia after working for years to “keep our lights on and our factories running.”

“Don’t let anybody tell you we can’t make things in America anymore, because we can, we are and we will,” Clinton said from Miami, Florida. “Together we can break down the barriers that face working class families across America, especially in struggling rust belt communities and in small Appalachian towns that have been hollowed out by lost jobs and lost hope — families who for generations kept our lights on and our factories running.”

Both Clinton and Trump swept through the South on Super Tuesday, claiming victory in their parties’ primaries in delegate-rich Georgia, Tennessee, Alabama and Virginia. The front-runners appeared ever more likely to end up in a general election showdown.

On the Republican side, Ted Cruz won his home state of Texas, the night’s single biggest prize, as well as neighboring Oklahoma. Democrat Bernie Sanders picked up a home-state win as well, in Vermont, and won in Oklahoma, too.

Still, the night belonged to Trump and Clinton, who turned the busiest day of the 2016 primaries into a showcase of their strength with a wide swath of American voters.

Signaling her confidence, Clinton set her sights on Trump as she addressed supporters during a victory rally.

“It’s clear tonight that the stakes in this election have never been higher and the rhetoric we’re hearing on the other side has never been lower,” she said.

Trump, too, had his eye on a general election matchup with the former secretary of state, casting her as part of a political establishment that has failed Americans.

“She’s been there for so long,” Trump said at his swanky Mar-a-Lago resort in Florida. “If she hasn’t straightened it out by now, she’s not going to straighten it out in the next four years.”

Trump’s dominance has rattled Republican leaders, who fear he’s unelectable against Clinton in November. Even as Trump professed to have good relationships with his party’s elite, he issued a warning to House Speaker Paul Ryan, who declared earlier in the day that “this party does not prey on people’s prejudices.” Trump said that if the two don’t get along, “he’s going to have to pay a big price.”

But all efforts to stop Trump have failed, including an aggressive campaign by Florida Sen. Marco Rubio to discredit the billionaire businessman.