Growing up in Louisa – Talking Walls!

It seems so long ago when Kaye Buskirk (now Shepperd) took a seat on some furniture that remained on the old LHS auditorium stage. We’d both just turned in our band uniforms and instruments in anticipation of graduating and never returning to the building. It was a Friday, I think, and the big ceremonies were to take place the first part of next week.

Kaye was my pastor’s daughter and was a fellow band member, a member of the Methodist Youth Fellowship, and the church Choir, so we had been causal friends over the last couple of years since her family had moved into town.  “Man, if only these walls could talk,” I suggested as I looked out on all of the empty seats. I think she was a little astonished that I had any sentimentality, based on her look at me. “I’m sure a lot of kids have gone through these doors,” she responded. “Yeah, my mother and aunt and uncles, and many others from all around here all came here. Some of them fell in love, got married and sent more kids here.”

We chatted a while, each musing over how the concerts, plays, and assemblies had affected our lives. Finally, with a sigh, it was time to go. Out of the blue I invited her to a movie at the Garden Theater that night and she smiled and accepted. We saw the movie again the next night, too. We weren’t a ‘number’ as they say, but we did see each other for a short time. Even after I had gone into the Air Force and was stationed here in Virginia, I came back and saw her at least once. Our lives went different directions, each of us in a different world of our own making, yet tied together with memories. 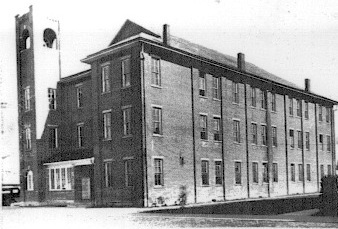 Since beginning this column several folks have sent me pictures of the old ‘normal college,’ as it was called in earlier days. Some were of the time it was torn down and burned. Those pictures were painful in a way I cannot easily describe. That was the building that nearly all of us had come to love as much as a relative. Certainly it was old and somewhat ugly. (Dare I look in a mirror?) The building had numerous safety problems and might have been an eyesore, but it was what we knew. I can shut my eyes and still see the faces of many of my friends, some of which I had a secret attraction to, and others whose attention I craved.

I remember Teeny, and those wonderful ears and smile of Harry Richard. There was Jim Bob Hatcher and Butch Wellman, Mary Jean Ball, Nancy Moore, Joan Carol Bailey, and Betty Hager Mead. There was Gary Smith, Charley Jones, Lois Caudill and the two sets of Thompson girls. Kay Varney and Luke were there, Billy Elkins and Johnny Bill were my best friends, but there was also Creep Chandler and Johnny Justice who ran the hallways while Bascomb Boyd tried to rein them in. Carolyn Kelly would later marry Paul Davis, but I had dated her for a time. Jimmy Young was a friend, as was Jimmy Mullins. Linda Lee was in love with James Caudill and married him, later moving to Michigan where I had once lived for a year.

Bernard Nelson went there as a student, and later to patrol the football games. Carol Short, J. Lynn See and Bill Shannon were a in classes ahead of me. I remember the heroes who played three sports for the Bulldogs.  I heard the laughter of Mary Eva Berry, Julia Burkhead, Cookie Roberts and Clara Jones. There were Carolyn Shortridge, Bonnie LeMaster, Ken and Bill, Herman Chandler, and Doris Ferguson, during my tenure. Tommy Bussy, Liss Jones, Stanly Brown, Laralene Hays, John Moore, Jack Cyrus, Jimmy Walker, Paul Fannin, Duck Roberts, Bill John Sparks, Janet Nelson, Jim Ray Rose, Larry Weeks, Neva Francis Ewers, were all people I saw, some close friends. I remember several folks who like Merle Stevens could play any instrument like a pro, all by ear. I’ll never understand how someone can pick up an instrument and just play it. I need the music and then the grace of God to play a single note. All he had to do was hear it once and then play it. Wow!

There are so many names and faces. Each is a story or even a whole lifetime of stories. I cannot write down the names fast enough, or remember everyone except that they pop up outside of my control. Many friends are not listed in this article, but they will surely appear in the weeks to come as I push open the rusty gates of the file room. I know I will find generations of the men and women who have added to the memories contained within those hallowed walls, who have fought for our freedoms and in some cases paid with their lives. Many have graced those old creaky halls that are fading away even as we fade. A Chief Justice was there, but it wasn’t just the big names, it was the sum total of all those who have added richness to mankind. It was a soup most favorable, not bland in any way. It is spiced with sweetness, sometimes sharp and sometimes bitter, yet altogether right and satisfying. It is a brew that was worth its making.

I will write of more names, some who became pillars of their respective communities, some who disappeared, at least from my view, and many of older generations who came before me and some I remember as children. We have all been nurtured within those walls of the auditorium. We lived the stories and we loved. Like it or not, we painted the walls with layers of human emotion, and the silliness of our youth. The result was surely an abstract display of color, splashing with the yellows and redness of joy, with pockets of darkness and sorrows. Most of all, in looking back I know the strength of character of those people and I feel secure that they have each found their proper places and enjoyed a measure of success in their lives. Age is bitter-sweet, but the sweetness overcomes. Let us celebrate and know we are among kindred spirits that were developed in those ancient halls.

A few years ago I wrote about the belfry, the library, the oiled floors, and the study halls that most of Lawrence County youth saw every day of the school year.  This tower of strength that sat at the very end of Main Cross, opening its doors toward the community was for all of us at one time or another, the center of our universe. Having been there, I know that the strength was parceled out to each within reach and trust generations to follow have been equally blessed.

PS:  For those that like murder mysteries I now have two books out on Amazon. You can download them on your tablet, Kindle, laptop or desktop.